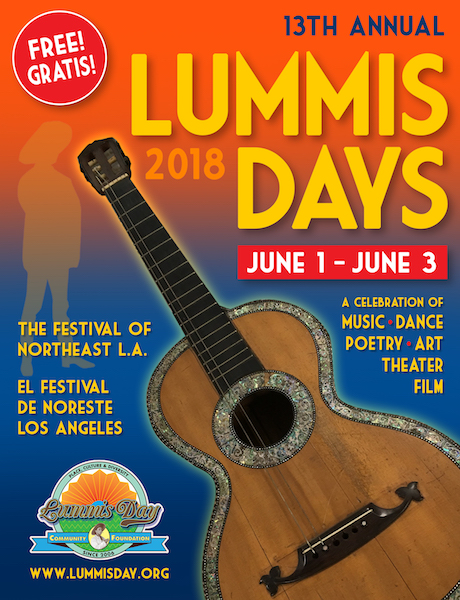 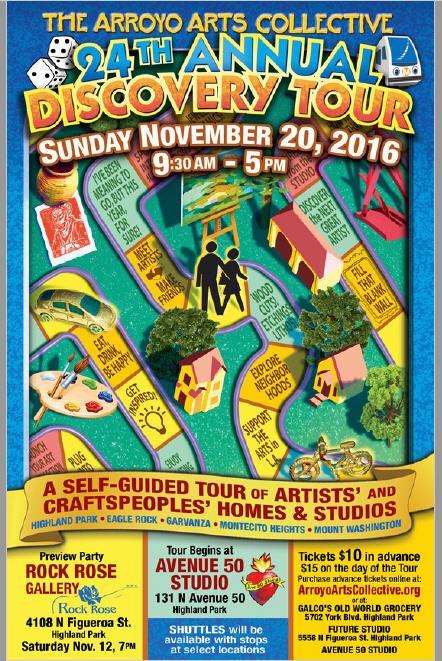 Northeast Los Angeles (“NELA”) has historically been a magnet for artistic talent. The steady influx of new galleries, restaurants and boutiques, has given way to a higher creative energy which also crosses many cultures.

On November 20th, the Arroyo Arts Collective invites the entire NELA community to visit the homes and studios of the group of artists who make up the 2016 Discovery Tour! The eighty-strong assembly of artists ranging from emerging to established, and from fine artists to craftspeople, will open their doors to you as part of one of the oldest and most celebrated art tours in Los Angeles.

As a Tour participant, you get to see painting, drawing, mixed media, sculpture, jewelry, woodworking, and many other forms of artistic expression in a wide range of styles. On top of that, you get the rare chance to admire an array of historic homes and colorful art studios in this vibrant community. Whether you are a savvy art collector looking for an edgy addition, a new home owner looking for wall decor, a fashionista looking for a cool pair of earrings, or a holiday shopper looking for that one-of-a-kind gift: you will find it!

The Tour will start this year at the artistic staple in the heart of Highland Park, AVE 50 Studios where participants will receive a map and tour badge. Maps will be available beginning at 9:30 a.m., and homes and studios will open at 10:00 a.m.

The May art exhibit features work by Elaine Parks, and Michael Falzone:
A native of Los Angeles, Elaine received her MFA from California State University, Los Angeles in 1999. Feeling the need to have a very different life experience, she relocated to extreme rural Nevada, where the sparse landscape's elusive beauty shaped her ideas about the human relationship to the environment. During a decade in Nevada, she exhibited at the Nevada Museum of Art, Reno, Oats Park Gallery, Fallon, Barrick Museum, Las Vegas, and the DIY art exhibition Nada Dada Motel. Elaine taught for seven years at Great Basin College and twice received the prestigious Fellowship Award from the Nevada Arts Council.

Michael Falzone is an artist whose career spans four decades and has crossed many boundaries. He began his professional activity after graduating from the Newark School of Fine and Industrial Art, Newark NJ in 1963. In 1972 he completed his formal studies receiving an MFA degree from Claremont Graduate University. His art has been referred to, by LA Times art critic, Colin Gardner, as a "hybrid sensual expressionism" with roots and influences in Fauvism and Cubism. Falzone confronts the formal issues of color, scale and composition through implied interaction between figure and environment, the serious and the playful in anticipation of the poetic.

Also on display: Works by Miriam Jackson and Jessica Ayala Schneider. Katherine Arion will set up her easel to draw pastel portraits at your request.

Mike Varney, founder of Shrapnel Records Group and Blues Bureau International says "Carlos Guitarlos is one of the greatest Blues/Americana guitarists of our time and he might just be a better singer than guitar player."

Cadillac Zack, of Southern California Blues Society says "Carlos Guitarlos is possibly the most prolific and soulful of American roots songwriters and performers today, if not all time"

Critic Jonny Whiteside says: "They don't call him Guitarlos for nothing--the cat wields his ax with flabbergasting skill, a mix of sophisticated technique and sheer musicality that allows him to employ a long-range artistic reach spanning a spectrum of impressive breadth, depth and height.

Technically, Guitarlos is unrivaled--he's capable of playing melody, an intricate bass line and beating out hot percussion all at once, creating a full-blown sound that positively dazzles. With a bottomless repertoire that demonstrates an intimate knowledge of almost every vernacular American music form, he also delivers it in a wildly idiosyncratic fashion that is as undeniably authentic as the hard-knock life he's led."


The SECOND SATURDAY of every month is ART GALLERY NIGHT in NORTHEAST LOS ANGELES. Galleries, artist studios, businesses, shops and restaurants open their doors as the streets fill with shoppers, diners, patrons and interested pedestrians.

Over 60 galleries throughout the area participate in the evening, all opening free to the public, with many offering artist receptions, demonstrations and live music.

Bob Taylor Properties, a local real estate office at 5526 North Figueroa Street, participates in NELA Second Saturday Art Night by by hosting a one-night, once-a-month ART and MUSIC EVENT, displaying work by some of the neighborhood's most talented and creative artists.
Older Entries