Memoirs of a Los Angeles Homebuyer Circa 1883

Republished from "A Southern California Paradise"  written Clniton B. Ripley, and included in a collection of essays compiled by R. W. C. Farnsworth, published in 1883, and now in public domain.

A house, to be comfortable, need not be constructed with such precautions against the extremes of heat and cold as in other places, but that every family should have a house of some description, costing as it may from $250 to $25,000, according to the means and tastes of the owner, is a fact that cannot be denied.

Houses of every style of architecture, and of all sizes, are found in Los Angeles and the surrounding communities.  Wood is used almost universally as a building material.  Very few brick structures are found outside of the larger cities.  Each man builds a house of just such a style as he may fancy, there being no attempt at uniformity of design.  Yet, if there be one kind of a house more popular than nother in this locality, as well as in all parts of California, it is a one-story cottage with all the rooms on one floor and massed around an entrance hall as a common center.

Such houses are very convenient, as they obviate the necessity of climbing stairs, which is a strong plea in their favor.  They present an exterior cozy and comfortable in appearance, and really deserve the popularity which they has aquired.  Verandas are frequently buiult on two or more sides of a house, if the owner's means will alow.  "The pleasantest part of a house is its veranda", is a common expression in California. 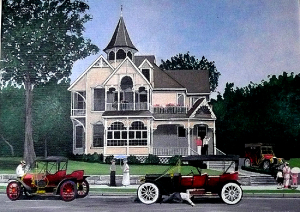